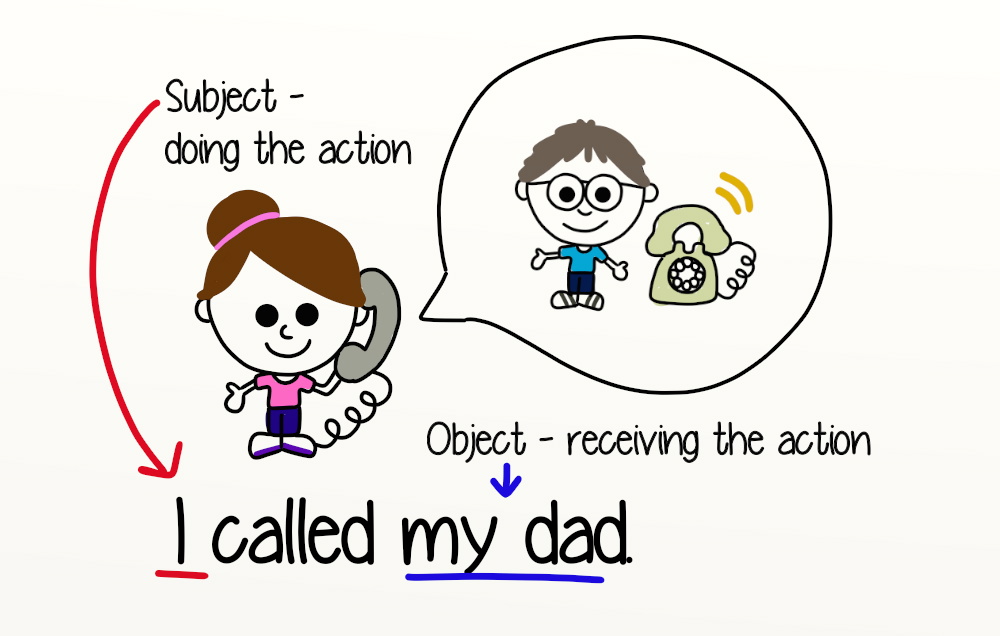 For example, we would say "Whom did you call?" because the answer is MY DAD, the object.

If you can answer the question being asked with "him," then use "whom.”

If you can answer the question being asked with “he,” then use “who.” 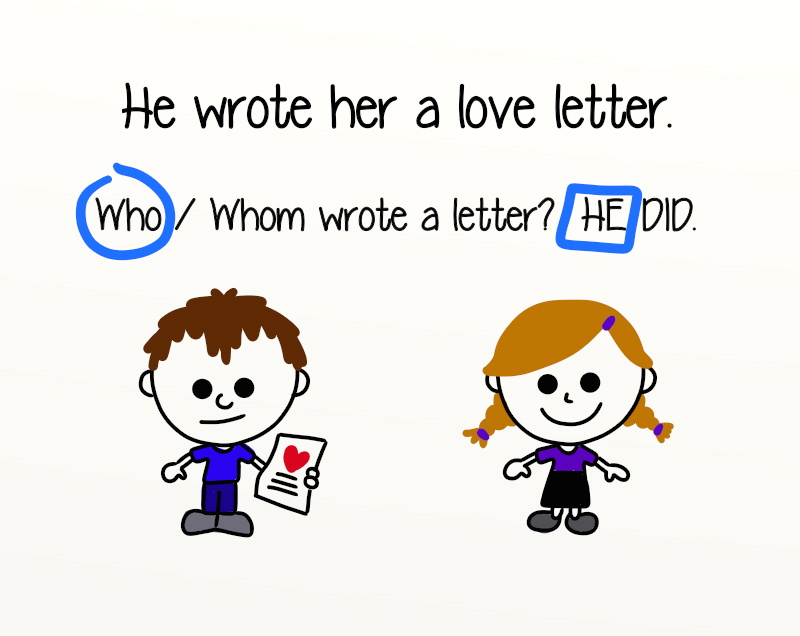 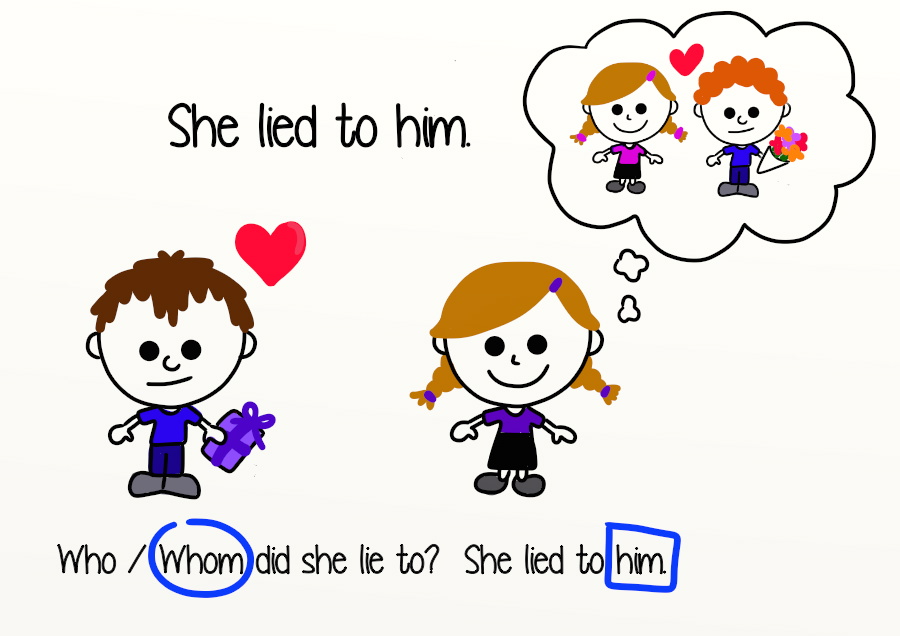 assist (verb/noun): to pass the ball that leads to the goal

Attacker / Forward (noun): a player that makes an assertive or aggressive attempt to score
ex. Ronaldo, Messi and Robben are three of the best attackers in the world.

Corner kick (noun): a free kick from the corner of the field

ex. He always takes the corner kicks for his team.

Crossbar (noun): the horizontal bar between the posts

ex. The player shot the ball, and it hit off the crossbar.

Defender (noun): a player whose task is to protect the team’s goal.

ex. David Luiz is one of the best defenders in the world.

dive (verb): deliberately fall when challenged in order to deceive the referee into awarding a foul

ex. Some players are very talented at diving.

dribble (verb): take (the ball) forward past opponents with slight touches of the feet

ex. He attempted to dribble the ball across the entire field!

first touch (noun): the first contact the ball has with a player’s foot

ex: He has a great first touch.

Foul (noun): a penalty given for an unfair play against an opponent

ex.  You should try not to foul the other team inside the box.

Goal (noun): a pair of posts linked by a crossbar with a net attached behind it
ex.. He scored two goals in the last match.

Goalkeeper / Goaltender / Goalie (noun): a player whose role is to stop the ball from entering the net

ex. The US goalie made 15 saves in the game against Belgium.

Goalpost (noun): the side of the goals

handball (noun): intentionally touching and redirecting the ball with the hand or arm, constituting a foul

ex. That was a handball!

Header (noun): a player hits the ball with his/her head

ex. He is really good at headers on corner kicks.

in the box: inside the 18-yard-box (the box just outside of the goal)

ex: He was fouled in the box!

Linesman (noun): an official who assists the referee or umpire from the sideline

ex. The linesman made a good call.

long ball (noun): a ball that is hit, kicked, or thrown a long way

ex. He is talented at sending long balls over the top.

Mark (noun): the specific player who you are responsible for guarding

ex.  Everyone get a mark!

Midfielder (noun): the players on a team who play in a central position between attack and defense

ex. Our midfielders need to attack a lot in today’s game.

nutmeg (verb/noun): to pass the ball between the opponent’s legs

ex. He nutmegged the defender before taking a shot.

Offsides (adj): in the attacking half ahead of the ball and having fewer than two defenders between the attacker and the goal line at the moment the ball is played

ex. The linesman threw up his flag to show offsides.

on the bench: where the substitutes sit when they are not currently playing in the game

ex: He was on the bench for the whole game.

ex.. The games in the World Cup have 30 minutes of overtime, if they end in a tie.

own goal (adj+noun): scoring a goal against your own team

ex: The first goal in the World Cup was an own goal!

pass (verb): move or cause to move in a specified direction

ex. He passed the ball to his teammate.

Penalty kick (noun): a free kick at the goal from the penalty spot (which only the goalkeeper is allowed to defend), awarded to the attacking team after a foul within the penalty area by an opponent

ex.. The referee awarded the opponents a penalty kick after the foul in the box.

pitch / field (noun): the place where a soccer game is played

ex.. The players lined up on the pitch / field.

Punt (verb): kick (the ball) after it is dropped from the hands and before it reaches the ground

ex.: The goalie punted the ball across the field.

red card (ad j+ noun): a card shown to a player being eliminated from the game

ex. Because of his red card, his team had to play a man down for most of the match.

referee (noun): an official who watches a game or match closely to ensure that the rules are followed

ex. The referee made some terrible calls.

Set piece (noun): a thing that has been carefully planned

ex. That team is really good at set pieces.

Shoot (verb): kick the ball in an attempt to score a goal

ex. He shoots and scores!  GOALLLLLLLL!

Shootout (noun): a tiebreaker decided by each side taking a specified number of penalty kicks

ex. The Netherlands won the game in a shootout!

Shutout (noun): a competition or game in which the losing side fails to score

ex. The game ended in a shutout.

Sliding tackle (adj + noun) : make an effort to steal the ball by sliding on the ground with one leg extended

ex. The referee called a foul against the defender for doing a dangerous sliding tackle.

stoppage time / injury time (noun): extra time added at the end of each half to compensate for the time lost dealing with injuries

ex. Most halves have about four minutes of stoppage time.

substitute (verb / noun): a player who replaces another player during the game / to use in place of

ex. He trapped the ball with his right foot and immediately took a shot.

yellow card (noun): a card shown to a player being cautioned

ex. He got a yellow card in the first minute of the match.

a game changer – a situation that can have a dramatic effect on something
ex: Learning English could be a real game changer in your career.

ex: You need to be on the ball in this job.

to watch from the sidelines – to be an observer, rather than actively involved in something

ex: Don’t just watch from the sidelines.  Do something!

to kick something off – to start something

ex: “I’d like to kick this meeting off by welcoming our guest speaker.

to take sides – to support one person or cause against another or others in a dispute or contest
ex: I refuse to take sides in this argument.

a game plan – a strategy worked out in advance
ex: We have to come up with a good game plan if we want to beat the competition.

give it one’s best shot – try one’s hardest
ex: I don’t know whether or not I can do it, but I’m going to give it my best shot!

British English is the form of English used in the United Kingdom, and some other countries such as Australia, New Zealand and South Africa...

American and British English have some differences in pronunciation, grammar, vocabulary, spelling and idioms. 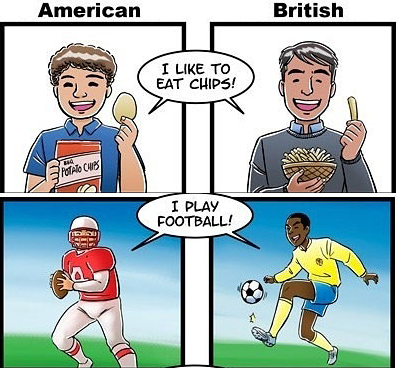 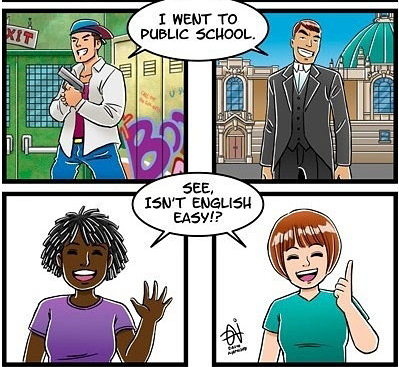 Let’s learn about some of the differences...

American: GET ALONG WITH
British: GET ON

* Have or establish a friendly relationship with someone.

American: RAINED OUT
British: RAINED OFF

* When an outdoor event is postponed or interrupted by rain.

American: to engage in sexual activity—usually implies more than kissing or “making out.”

British: to meet or begin to work with another person or other people

British: to wake someone with a knock on the door; to warm up before a tennis match

British: wash dishes after a meal

Commas are used to separate items on a list.

I went to the shop and bought some apples, oranges, and bananas.

Commas are also used to separate clauses and are often found before conjunctions.

My mom liked the movie, but it didn’t get good reviews.

Commas are used to separate a non-defining relative clause from the rest of the sentence.

The students who passed the test had a party.

The students, who passed the test , had a party.

If you use a conjunction followed by a new subject, you need to use a comma.

The period marks the end of the sentence that contains a statement.

My name is Diane.

The question mark marks the end of the sentence that contains a question.

The exclamation mark marks the end of a sentence that contains an expression of strong feeling.

We won the game!

The colon indicates that what follows is an explanation or elaboration.

There was only one possible explanation: he had missed the bus.

Colons can be used to introduce lists.

The US government has three branches: the legislative, the executive and the judicial.

The semi-colon is often used to separate two clauses when a coordinating conjunction is not used.  Sometimes it is used in place of a period.  We use this when we have two complete sentences that are very closely related.

The apostrophe is used to show a contraction or possession.

These are the students’ books.  My dad’s favorite food is pizza.

Be careful-- we don’t use an apostrophe to show possession with “it.”

ex. The dog ate its bone.

The dash is most commonly used in formal writing, similar to colons, semicolons and brackets.

My father-- a man who has worked hard for the past 20 years-- was recently laid off.

I am involved in the day-to-day running of the office.

Quotation marks are put around quoted, spoken or written language.

“I’d like to go to a nice restaurant,” she said.

“Where’s the house?” he asked.

Brackets are put around material that we want to include as extra information.

The boy I met on the bus (I can’t remember his name) was really nice.

A forward slash is used to show alternatives.

Answer yes/no to the following questions.

Ellipsis can be used to indicate an incomplete thought in writing.

Ellipsis is also used to show the place in a passage where words have been omitted.  If an extract is taken from a longer piece of writing, ellipsis can be used to indicate the missing sections of writing. 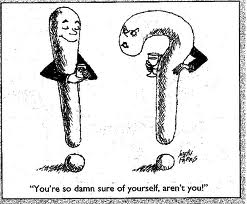